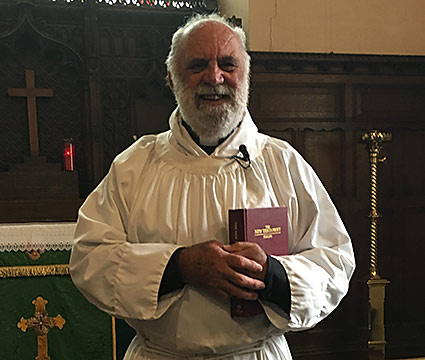 Fr Neville sends us this Easter message from Australia and hopes to be able to join us in person when permitted:

Recently, in a sermon, I heard a priest pose the rhetorical question “So what are we doing here?” Unfortunately, the answer wasn’t forthcoming. So here is a condensed version of what I believe we are doing every Sunday morning as we celebrate the Eucharist.

First we need to understand something of the Old Testament idea of sacrifice, then what that sacrifice had to do with Moses and the Ten Commandments, and then what Jesus was doing at the Last Supper.

A sacrifice generally involved a valued living creature which was male, unblemished and first born, and this was then given as an offering to God. The whole point was that it was valued, that giving it was a wrench but that it was a valid way of thanking God. It was usual that it was the blood of the bird or animal which was collected and given as a thank-offering because the blood was seen as the life-giving force. Where the animal was perhaps a lamb or a kid, then the body was roasted and eaten. Waste not ………

When Moses came down from the mountain with the ten commandments, he gathered the people together and required of them that they agreed to follow these laws. It was a contract between God and the Hebrews. That contract has also been known as a covenant or testament (as in ‘last will and testament’). We know it as the ‘Old Covenant’ or ‘Old Testament’. But Moses wasn’t finished because he knew how fickle the people were and how likely it was that they would go back on the contract. So he took a bull (the most powerful and valued animal at that time), sacrificed it and collected the blood. Now here it gets a bit gory. Half of the blood he threw over the altar that had been built and which held the stone tablets. Then he threw the other half over the people, and in that way sealed the contract between God and Man. The two parties were now linked by the blood and life-giving force of that most powerful animal. Afterwards there was a heck of a good barbeque – remember, waste not……. And in that way the Old Covenant was established.

Fast forward to the night of the Last Supper. Jesus, the first born, unblemished by sin, son of God, knew that he was to die, a sacrifice for the sins of all humanity. So, as they celebrated the Passover with unleavened bread, he took the bread and then the wine and gave it to his disciples, telling them that this was his body and blood. Like Moses, the disciples, as representatives of all mankind, received from the priest and the victim, the blood and the body of this perfect sacrifice. This was the signing of the new contract between God and Man. There were now two great commandments: love God and love your neighbour. We know it as the New Covenant and it no longer contained all those “thou shalt nots….”. Rather, it is the good news of love and salvation for all.

But because we, like the Israelites, don’t always live up to our side of this new contract, we need to be reminded over and over again of what is involved, and then, to re-sign that contract by sharing in the Body and Blood of Christ. So that is what we are doing everytime we celebrate this great Eucharistic feast. That is why we are here. So this Easter reflect on that new contract, how it came about and why we need to keep going back to re-sign.

Downing Street has today announced that The Revd William Hazlewood, currently Vicar of the United…

As Thomas Becket hits the national and international headlines, with the pilgrimage of his bone…