Our four notable bells (tenor, third, second, and treble) are hung in the belfry in a straight line east to west, so that they swing in a north-south direction. They have an early history: when the Collegiate church at South Malling was dismantled in March 1554 one of its six bells was given to St Thomas at Cliffe together with the ceiling of its Lady Chapel, its seats, the stone of its walls and the case of a pair of organs. The bell is still in the tower, weighing 7 hundredweight 2 quarters 17 pounds (418.9kg) It is indistinctly ornamented and inscribed: I H S ini ano d mccccclxvi.

When the ring of four bells was re-installedin the late 1990s after extensive and expensive repairs , one was connected to the clock so that it would once again chime on the hour. These bells had previously been restored by the Whitechapel Foundry in 1906 when all the seventeenth century fittings, headstocks, pulleys, clappers and wheels were replaced.

The tenor bell, bearing the inscription ‘TG 1619’, was cast by Thomas Giles, who moved from Chichester to Lewes in 1614 to take over his brother, Edmund’s, foundry.

The original treble, which was recast in 1906 at the London foundry of Mears and Stainbank, and the third, are inscribed with the names of churchwardens John Russell and Edmund Newborough and ‘LULHAM MADE MEE 1649’ (two years later a John Lulham of Chiddingly cast a new peal for Eastbourne’s church). 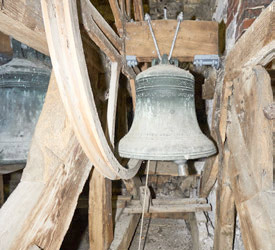 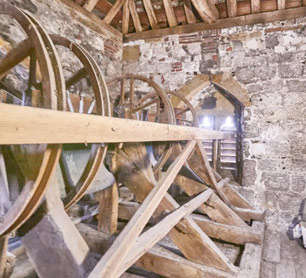