The west window (pictured top) over the entrance door dates from 1897 and commemorates in stained glass the diamond jubilee of Queen Victoria’s reign: ‘WHICH UNDER GOD HAS BEEN FRUITFUL IN BLESSINGS TO CHURCH AND STATE ’. On the left panel is St Thomas, in the centre Our Lord Crowned, and on the right St George.

In the stained glass window put up at the end of the south wall in 1905 ‘TO THE MEMORY OF CHURCHWARDEN AND BENEFACTOR JAMES WELLER ’ the church is pictured (in miniature) in the left-hand section, beside the heads of ‘the women also which came with him from Galilee’ (Luke 23:  v55). Mr Weller, who died in October that year aged 75, was a benefactor of the parish.

The east window, with its stained glass (pictured below), is among late-nineteenth century additions and alterations to the building. it is in memory of Sydney Locock who died in August 1885. It’s inscribed ‘Blessed are they that hunger and thirst after righteousness sake for they shall be filled’ and depicts shepherds – nativity in the lefthand panel;  Christ in majesty in the centre, and Virgin and Child – nativity on the right.

In the  South Chancel, the east-window is ‘To the Glory of God in Memory of Alfred Hillman of the Cliffe, born April 23rd 1823; died September; and of Elizabeth Mary his wife, born April 2nd 1828 and died December 29th 1907. Its left panel depicts the Word made Flesh, in the centre I am the Good Shepherd, and to the right he is not here but is Risen. 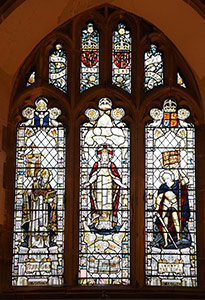 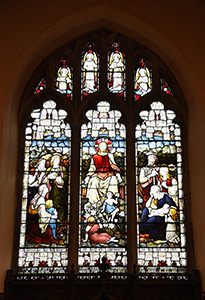