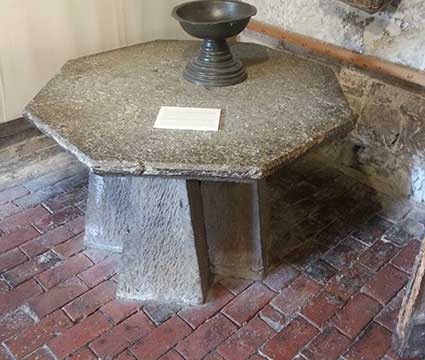 As Thomas Becket hits the national and international headlines, with the pilgrimage of his bone fragment from Southwark to Canterbury, a church dedicated to his martyrdom reveals incredible close links to the former Archbishop.

St Thomas a Becket at Cliffe is a parish church in Lewes, encompassing the parish of All Saints. Becket was a benefactor and frequent visitor to the nearby Collegiate Church of St Michael the Archangel, just a short walk away.

Cliffe church, originally a chapel of ease of the college of Malling, was built, so it is said, by the direct order of Archbishop Thomas Becket, to whose martyrdom it is dedicated. It is also suggested that its building was financed by one of Becket’s murderers as a penance for committing an act of sacrilege or by someone who witnessed the dastardly act but did nothing to prevent it.

Today the church is in trouble and urgently needs to find £60,000 for vital repairs. “The west window is in danger of falling out, the clock mechanism has seized and water drips onto the rememberance altar”, explains churchwarden Trevor Butler. The church is launching its Restoration Appeal on Trinity Sunday, a feast said to have been instigated by Archbishop Becket.

“When some buildings opposite the church were being demolished in the nineteenth century, the arms of Archbishop Becket were found carved upon the chimney breast of one of them”, adds Trevor Butler.  “Others have suggested that a more likely builder of the church was Hugh de Boscham, a personal assistant to the archbishop and present in the cathedral at his murder, during which he kept in the background in case he suffered the same fate as his master.”

Famously slain by four knights in Canterbury Cathedral on 29 December 1170, it is said that  his murderers arrived at the Archbishop’s mansion in South Malling for a night’s rest on their way to France. An apocryphal story is that, as they sat by the fire, the table on which they had rested their blood-stained gauntlets and swords began to shake violently and their weapons were thrown to the ground. This occurred twice ‘though the table was large and massive, and firmly fixed and no sign of movement could be seen when lights were brought’ says Dean Stanley who records the ‘miracle’ in his Memorials of Canterbury Cathedral.  Today, the table sits in Anne of Cleves House in Lewes.

Our wonderful 350-year-old clock in the church tower has, sadly, fallen silent. The ancient clock…

An enormous thank-you to everyone who came along and supported our bumper Cliffe Fair. We…

The Bishop of Chichester has appointed the Revd James Hollingsworth, Vicar of Sutton with Seaford,…